My blog details all the fantastic "pins" I've actually made! Enjoy!

My recipes are out of control and as I add to my collection, my current recipe binder is overflowing.  So, it’s time to upgrade!  This pin inspired my latest project.  Here is how I did it …

I bought a large binder and added a pretty cover.  The cover is an 11″x11″ piece of scrapbook paper.

I added a 11″x3″ piece of scrapbook paper to the side of the binder.  I used my cricut to add the letters “COOKBOOK”.

I created section dividers by cutting scrapbook paper to 8.5″x11″ and inserting them into the plastic sleeves.  I made divider labels by cutting light blue index cards to 1.5″ to 2.5″.  I folded them in half wrote in the title.  I used packing tape to affix the labels the dividers I’d created.

I created a template in Word to use for all my recipes.  I’m sharing my hard work with you and you get one of my Pinterest recipes (Cajun Shrimp Casserole).  I’ll be adding a post about this recipe very soon.  You will notice that next to each ingredient, I include the calories and fat.  At the end of my recipe, I calculate the calories and fat per serving.  Now, I’ve attached the word document below.  I’ve never done this before, so if the link doesn’t work, my apologies.

I also created a recipe index to place at the end of my binder.  Included just for you!  I used a page numbering sequence for each divider.  I have separate word files (that includes the recipes) for each section of my binder.

I was skeptical of this recipe, but everyone says it’s good.  So, I gave it a try.  I blended all the ingredients listed.  This made one huge serving.  As you can see in the picture, I poured it into a huge glass, but there was still leftovers in the blender. It was good and sweet!  I couldn’t taste the spinach, but I could feel the texture of it, which wasn’t all that appealing to me.  I LOVE the idea of blending in the spinach for an extra serving or two of veggies.  I will make this again, but won’t eat it everyday for breakfast!

Tip:  I’ve started chopping up bananas that are going old and freezing them for my smoothies.  I’ve found this a great way not to waste those “going brown” bananas!

Substitutions:  I used 2 T. of peanut butter and I probably only added 2 cups of fresh spinach (all that would fit in my blender).

I’ve heard of this famous frozen hot chocolate before.  I think I may have even seen it in a movie.  When I saw this on Pinterest, I wanted it then and there.  The only problem was that I’d broken my blender a few days before.  Sigh!

Blender Shopping:  I recently broke my old, non ice crushing blender.  So, first things first …  I had to buy the perfect blender that would make a good smoothie and actually crush the ice.  The recipe tutorial shows a Blendtec blender.  I quickly searched for it on amazon and found it for $380!!  Yikes!  I’m not sure I want to spend that kind of money on a blender.  So, my search continued.  I saw the Vitamix, too and that one was $500.  I read all the reviews and everyone says the Vitamix is worth the money, etc, etc.  I was sold for a split second and then my senses kicked it.  No way am I going to spend that kind of money on a blender.  So, I asked my friends on facebook for suggestions and I was recommended the Ninja.  It was $120 at Costco ($160 on amazon), so I got that one and felt like I got a good deal buying at Costco.

This recipe was easy and delicious.  This is a good recipe for kids.  They can pour in the milk and hot chocolate packets, sprinkle the chocolate chips, scoop on the whipped cream.  Not only did I find a good new recipe, but I really got two recipes.  The recipe tells you how to make your own whipped cream (I’ve never made my own before).  It was sooo easy and sooo delicious.  I think from now on I will always make my own whipped cream.  Recipe:  1 cup of heavy whipping cream, 2 T. of sugar and whip until it looks like whipped cream.  This recipe makes probably 8 servings of this delicious treat.  I had to dump out a bunch.  I actually considered calling my neighbor to see if she wanted the leftovers because it was so good I didn’t want to dump it.

BTW, the Ninja worked awesome!  I can’t wait to try more recipes with it!

Time:  15 minutes!  Quick recipe, but I used my blender and my mixer, so there was a bit to clean up.

I was a bit nervous trying this recipe.  There were many reviews on the website that said the orange flavor was too strong.  I followed the recipe exactly, and I didn’t think it was too “orangie” at all.  In fact, I thought it could use just a little more flavor.  The reviews also complained that the chicken was dry and the cook time was too long.  I did cook on high for 2 hours, but anymore would have been too much.  My family liked this recipe (not loved).  I served the chicken with white rice and some stir-fry veggies.  The next day for lunch, the chicken was dry (but my Chinese leftovers always are).  I will make it again, but change a few things next time.  I might double the sauce recipe.  I like to stir the sauce into my rice, but there wasn’t enough to do that.  Also, I will add some additional seasonings (maybe some garlic since it’s my favorite).

Substitutions:  None.  The recipe doesn’t specify an amount of chicken breast.  I used 4 large chicken breasts!  Also, I used more than 1/3 cup of flour.

Substitutions:  I added 1/4 t. of cinnamon since I didn’t have any cardamom.  I used 2 large bananas instead of 3 small bananas 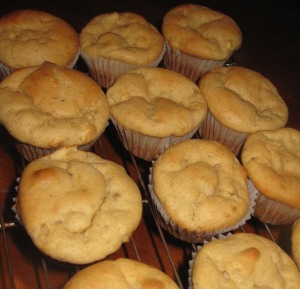 I love fall because all the pumpkin farms sell my favorite apple cider donuts.  I was drawn to this recipe because I thought these cinnamon sugar donuts looked similar to the apple cider donuts.  It turns out they don’t taste like them, but that was expected!  These donuts were soooo easy, sooo fast, and sooo delicious.  My two daughters and I love them.  We will see what my husband thinks when he gets home (if there are any left).  I should note that they cook pretty fast.  I cooked the second side a bit too long, so make sure to pay attention.  One great thing about this recipe is that the only thing I had to purchase was the biscuits.  The rest of the ingredients are staple items found in most families pantries!  Also, this is a fun recipe to make with kids.  My 4 year old had fun cutting the holes in the biscuits and dipping in the sugar!

Update:  My husband said they were the best donuts he’s ever had!

Time:  18 minutes total!  I should deduct a minute or two for the time spent getting my daughter up from her nap.

My family splits holiday time with my family and my husband’s family.  At the age of 32, I still have not made a turkey, until yesterday!  I made my first turkey!!  I turned out moist and tasty; however, it took an extra hour to cook.  I pinned this recipe for turkey cranberry monte cristo sandwiches that I thought would be perfect for my leftover turkey.  I was somewhat disappointed!  I wanted to taste the turkey, but instead all I could taste was the french toast bread.  I think this recipe would be good if you are on day 3 of leftovers and want something different!  But, if you’re looking for a good ole fashion turkey leftover sandwich, this is not the right recipe!  I may try it again with the proper ingredients.  I did substitute two of the key ingredients (fontina cheese and arugula).

Substitutions:  I struck out at the store!  I couldn’t find Fontina cheese or arugula.  I substituted cheddar and spinach.